New Plans for Lira – The Eyes Have it..

Lira has been a pleasure. She has learned quickly, embraced everyone she has met and has just been wonderful all around. Unfortunately, something bizarre has developed in her eyes. She has small blue rings around her eyes, which is a DQ in the show ring.

Lira had been planned to be my show puppy, and I had hoped to finish her championship and pursue obedience and other interests she might have. After much deliberation and after speaking with her breeder Cathy, we made the decision to return her to Cathy to find a good pet home. If I had had her any longer, I don’t know that I would have been able to give her up..

I gave her a bath last night, and a good brush and blow dry on the table on I had bought for her. I stayed up extra late and sat on the porch with her, and watched her run circles in the yard with Chloe (their favorite pastime). This morning, I packed her up and drove her to the airport. She looked so excited in her crate, like “Where are going next?!?”. Even though she was only with us for a short time, it was so hard for me to leave her there. She is on route right now to Cathy.

I am glad that I had a breeder like Cathy who was willing to take her back and find her a good pet home due to her DQ. A lot of breeders might not have done that. This is a hard lesson, but it is a reminder of why it is so important to find a breeder who you can really trust when you’re looking for a show puppy or really any puppy where you expect good health and good temperament.

Below is a photo of Lira’s eye…this appeared in both eyes. 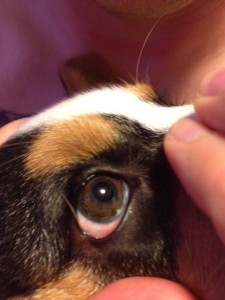 About Nurse for Wear

<3
View all posts by Nurse for Wear →
This entry was posted in Conformation, Lira, Uncategorized. Bookmark the permalink.

6 Responses to New Plans for Lira – The Eyes Have it..